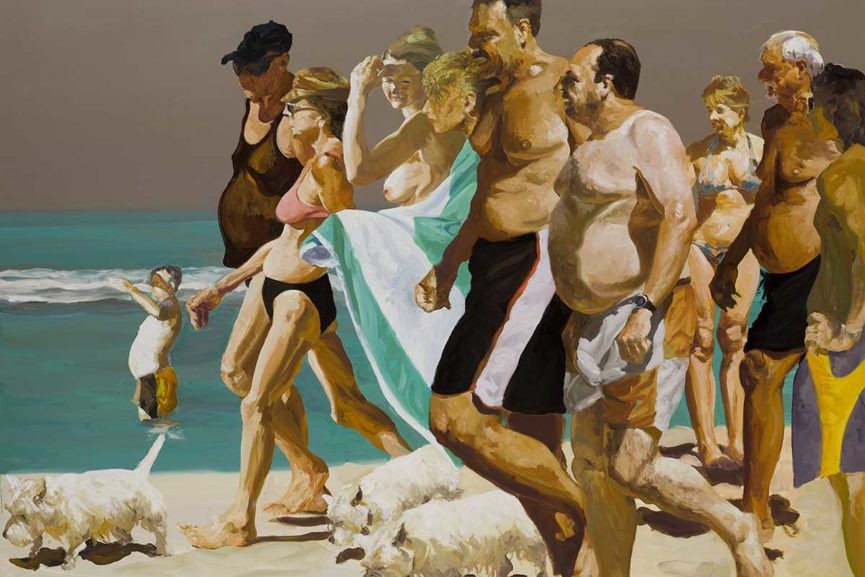 The Party was relentless,

all kinesis and acceleration.

It took what it needed,

and sucked everything into its esurient maw.

Feeding us all to the crushing beat of psy-trance.

I was there to see it born.

“We should do a rave in the abandoned slaughterhouse.”

Eyes glinting with the dark anticipation of putting hippies dancing on a charnel house.

We all basked in the glow of seeing the “good-vibrations-vegan, set” slowly waking to the realization of where they were.

We saw it all and found it good.

It was Summer by the sea in Alentejo.

Some of us were on holidays, others had jobs on the beach and, most of us, were unemployed.

So we had time.

Someone got a generator,

Another a PA system,

Lights were produced from thin air

And in no time we had what we needed for the féte.

as there was none,

only goodwill and a feeling that fate was active in our endeavour.

As so many things,

It started with a whimper.

Two or three of us around the dj table

thrown over the stone where they cleaned the carcasses.

The music evolved from EDM to Death Industrial in less than two hours.

It suited the space,

Some people came, looked, and went away.

There was no mood to compromise.

The morning after, we were drinking in front of the small fisherman’s houses perched some 40 meters from the slaughterhouse.

and all those  working in the beach,

were living in these cramped white spaces with benches outside.

Where we would sit

Someone left a cd running with Brighter Death Now in the PA.

It was around 7 in the morning and they had to go to work.

The day shone belligerently as we talked about the night before.

“-I think we should take the PA out of the abattoir.”

“-No! Don’t do that! It’s so fucking cool! We haven’t even done our band photos there!”

We brought the PA outside and got it ready to blare,

in the clear, indifferent air of Alentejo.

We were far from everything.

The tarmac stopped at the beach.

From there two dirts roads started,

If you’d take the one closer to the sea for some 900 meters,

You would be where we where.

There was only farms, dogs and the perpetually drunk locals that the place vomits in the shape of old men.

Oh yes,
We fitted right in.

It started with ten people,

there were thirty, forty people there.

I remember sitting  by the fishermen’s houses,

The one’s with the bench,

The one’s where we sat for eons

I remember being there and thinking;

The place was managed by a Irish family.

They were ok in the beginning, but then not so much.

threats of telling what was happening to the owner,

who was connected to the IRA and wouldn’t be amused.

Apparently César knew him also, and all the phone calls stopped when they couldn’t get decent arbitrage.

So the party continued.

One week in, this turned into a local event.

If you were in a 50km radius you probably were there.

It was my third day there,

When my girlfriend asked:

-”Do you want another one?”

I looked at the whisky bottle I was nursing,

Not remembering what and for how long I was drinking,

She got into a car with some friends and disappeared in the dust,

Towards the town, alcohol, and food and telling more people where we were.

I remember passing out by the fishermen's houses.

When I woke I was strewn amongst the feet of dancers.

-”Are you ok man?! You were sleeping, so I kept your glasses, just so no one would step on them.

And he danced away never to be seen again.

and ascertained that the Party had grown to engulf me.

I think it was the second day,

When Mónica told us we shouldn’t be there when his girlfriend came.

was a spearfisher that lived in the house next to ours.

When it got cold,

Three or four in the morning,

everyone looked for a place to stay.

And in our place there was a living room, where anyone that could squeeze, could sleep.

It was so cramped that you layed with your head over the feet of someone, and,

if anyone got up,

we would all move.

If this was the house of the Party,

Mónica was somewhere else.

at the growing party.

He had no appetite for this.

All he wanted was calm seas to fish near the rocks,

catch one or three fishes,

The Party had nothing for him.

I can’t remember when,

because he had something to say.

He said that he made peace with his girlfriend,

which we didn't knew,

that this was to be a new beginning,

and he wanted to make a nice dinner for her,

a sweet and romantic evening.

And if we, please!

just for this night,

would stop the Party.

Off course we all said yes,

how could we not?

Mónica was such a good guy,

and we were so eager to give it to him.

Unknowing, at that moment, that we were promising something what was not ours to give.

The Party continued regardless of our screams for silence,

It seemed to get louder,

Monica came out his house,

He came out swinging his bat in the air,

as if to impress on us his commitment to using it.

Slowly, the mdma people moved just enough to be out of range,

He screamed into the night,

as everyone did their best to ignore him,

Then César and Leite got there.

César stopped in front of Mónica and said the kind of words that make a bull jump you.

Mónica left the bat on the floor and punched César on the face.

Leite tried to separate them,

and, when they saw him,

they punched him instead.

When I looked again, César and Monica were hugging, Leite seemed pleased, and it was morning.

César passed by me and said,

I believed it was.

We were at the beach when someone said:

-”We should do a big party.

“Something in the thousands. Something to remember.”

César went to talk to the Irish,

and explained why a bigger party,

with people buying for beer

and they getting a cut, could be a good thing.

I don’t know from fear or cupidity

but they said yes.

When I looked from my vodka bottle, the Party had changed,

It had moved nearer the house of the Irish.

There was a stage,

And music that churned menacingly on.

When it got dark, it exploded,

lights to be seen for miles,

music to be heard for further than that.

The Party got bigger.

Someone should have went,

To the police station and tell them that we were having a party,

But this had slipped through everyone’s fingers.

-”Oh! A permit! Yes! I talked to your colleague that was there this morning.”

-”Well, his name was (noise, noise), and he said it was alright, and we should tell it to anyone who came here.

-”I’m going to call the precinct and check it out.”

They were shuttled from person to person,

talking to everyone who would listen,

and waking up to terrible realization that no one was in charge.

This took them from two to 3 in the morning, until someone put their arms around the cops and said,.

We turned off the lights, moved the Party some 70 meters up  the road and resumed the festivities.

I usually stayed for three or four days at a time,

When I came home, 250 km away, I always would feel empty.

Depleted of wants and reasons to be,

A physical and spiritual hangover.

As I tried to get my life back together, the phone would rang:

And I would find myself saying,

For two months that was what I did.

I went there for 3/4 days, it would get too much for me and I would go home.

Then someone would remind me of the Party, and I would think,

“The fuck am I doing home?”

As Summer went, so it did.

The Party wasn’t the result of our volition,

nor was it something we could call ours.

It came like a metereological feature that formed fortuitously

and stayed there until it dissipated.