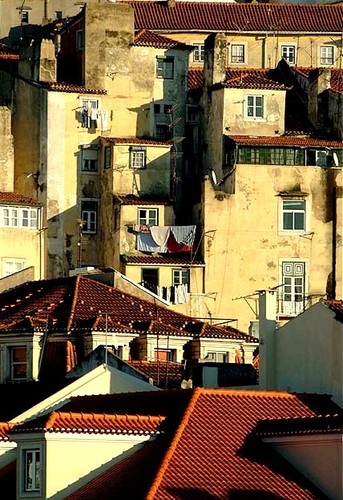 My building is made of flaws and asymmetry.

is a place of impossible angles and fortuitous stairs.
Time, need and chance are its bricks and mortar,
contingency and happenstance were its architects.
And there it stands,
With the understated confidence of the things who need no reason to exist.

Unencumbered with purpose,
Free from design,
It stands,
whole,
as a creation of passing time.

In it dwell several families of variable geometries,
countries and pigmentations,
who pray, (or not),

to different gods,
listen to their own music,
and have jobs that the others ignore,

speaking all languages,
eating all foods,
and,
all,
teaching their children to be good in different ways.

My building is multicultural,
multiracial,
and,
much more than tolerant,
it is accepting.

will leave garbage on the stairs,
that the women will clean it,

That we’ll greet each other on our respective languages,
That our affairs are our own,
and that at night there'll be silence,

because we all have children who need to sleep.

My building is in the wrong side of town.
The natives are poor, belligerent,
and live a life of drug dealing and petty crime.
This is viewed as local folklore by everyone.

They are the new iteration of the Third State,
a class of european have-not’s, that shape their worldview through the lens of a 50 Cent video.
Here, they emulate the ethos of the American ghetto and its caricature of achievement and respect.

But enough on the natives.

Lets talk of the foreigners that are so many that the neighbourhood has their name,
Mouraria its called.

Since the middle ages that is a unsavory and unregarded place inside the city.
In the beginning was a ghetto for the Moors,
and now its the same for the poor.

It’s funny how,
although, through time, we picked different outsiders,
we always put them in the same place.

Mouraria is known by their Chinese,
Indians,
Pakistanis,
Africans, (not the ones from the ex-colonies. The real foreigners),
and a unsavoury brand of Portuguese that it sires much to the disgust of all others.

They lay about street corners,
selling drugs,
stealing on occasion,
working when needed,
talking about football, fights and more football.
Huddling near the stores of the Pakistanis and Indians,
drinking beer and discussing the art of car tuning.

The Chinese stores await customers with belligerent efficiency,
The Ukrainian supermarket is open for business,

The African hairdressers blare out music calling their clientelle,
several Internet stores are there to link Asia with Portugal,
and the Brazilian and Chinese loaders take bales of goods to the stores as they chain-smoke and talk to each other.

In the middle of all this move Portuguese old ladies,
slowly intent in reaching the Portuguese bakery, where they’ll buy bread in the morning as it'll close in the afternoon.

The natives see all this from the walls they lean against all day...
seeming vaguely bemused by all the bustle that doesn’t concern them.
Intent only on the cars that stop in front of them, and screech away guiltily.

Only the foreigners seem to have a goal and a reason to exist,
all the rest just seem to … be.

Maybe that’s the privilege of living in your own land,
the only place where you can be, without justification...

you realize that is not Portugal that is only fog...